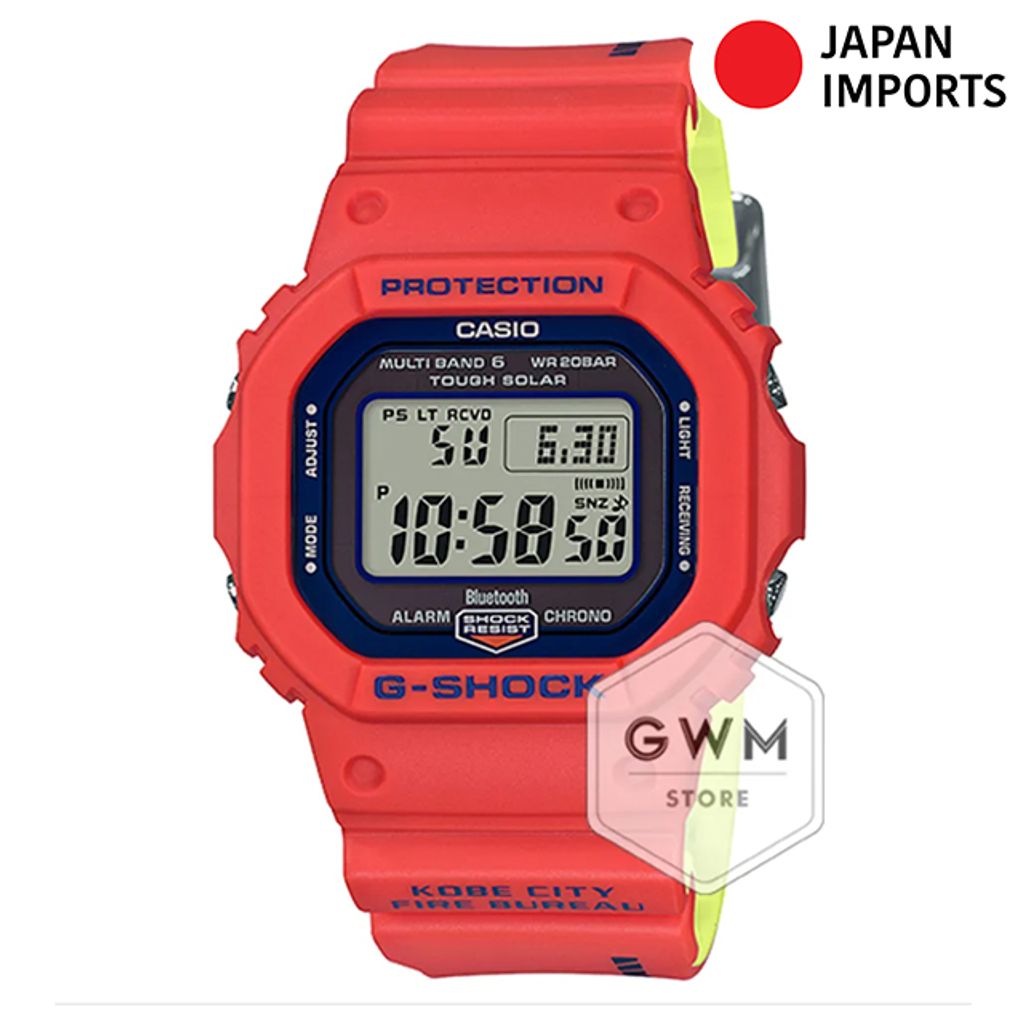 A collaboration model with G-SHOCK, which supports men who are active in harsh and "tough" environments from hand, and the Kobe City fire department rescue team celebrating the 50th anniversary in 2018, appeared.

The base model adopts a compact square case GW - B 5600, while incorporating the function that supports the activities of firefighters who need accurate time and information in any situation. In this time, we are also trying to reduce weight by adopting titanium for the back lid, the ring ring, and the beauty tablet.

In pursuit of accurate time accuracy on function side, it is equipped with Bluetooth® communication function and multiband 6 which corresponds to 6 standard radio waves of the world. Also , with the cooperation of dedicated application G - SHOCK Connected * and the button operation of the clock, stamp the time and place at that time on the map of the application. You can edit the title and manage it as log data and it will also be useful for action records of firefighting and rescue activities.

In addition, it is a tough solar with Casio's proprietary power saving technology, enabling stable driving, and it has practicality such as high brightness full auto LED backlight and world time.

By design cooperation of the fire department of Kobe City, we finished the coloring of commitment. With the firefighting suit worn by authorities' full-time rescue team / special altitude rescue team as a motif, orange in the base color, navy in the design part of the dial color part of the dial plate, vivid yellow on the back of the band I adopted it. In the band, a rope necessary for the rescue team, the back light part was given a design symbolizing a quick knot and a carabiner, and the fire fighting chapter of the Kobe City Fire Department was engraved on the back cover. In addition, the package adopted red which imaged the color of the fire truck in the outer box, the inner box was a helmet image, "rescue team's posture that finds a needle rescuer with sharp eyes and never releases once it is grasped" I treated the eagle logo. It expresses the hot feelings and dedication of the members to the details.

It is a collaboration model that was requested to be always "tough", and was born with the resonance of the spirit of the firefighters and G-SHOCK that keeps confronting the harsh environment.

2018, the Kobe City fire department rescue team (rescue team) celebrated its 50th year since its establishment. Since it was launched in 1968 as the name "firefighting rescue team", in addition to life rescue at the fire site, he also moved to the rescue of water fishery and mountain rescue, protected the city, mountain and sea of Kobe for half a century It was.

In 1995, the Great Hanshin-Awaji Earthquake hit Kobe. Since then, with the experience and thought as my heart, I am dispatched to large-scale disasters in Japan, such as the Great East Japan Earthquake and the Kumamoto Earthquake, and I am involved in life-saving activities.